We began planning our visit to Corfu and Athens a long time ago. There are many interesting features of chaplaincy life and ecumenical relations in Greece, and it is a long way from Brussels, so we allocated six days including travel. Our visit was wonderfully arranged by the Area Dean of Greece, Fr. Leonard Doolan, and the Chaplain of Corfu, The Revd. Jules Wilson.

On arrival in Athens, Leonard took us to a reception at the new Swedish Church Centre. In the centre of the photo, the local Greek lawyer who has done so much to give our church in Greece a recognised legal structure, and centre left, the Lutheran Pastor Bjorn who is a good friend and colleague to Leonard. The Swedish Centre is on several floors and offers social space for their church and educational space for the teaching of the Swedish language. This Centre provides an inspiration for what we would love to create for our own Anglican Church in Athens. 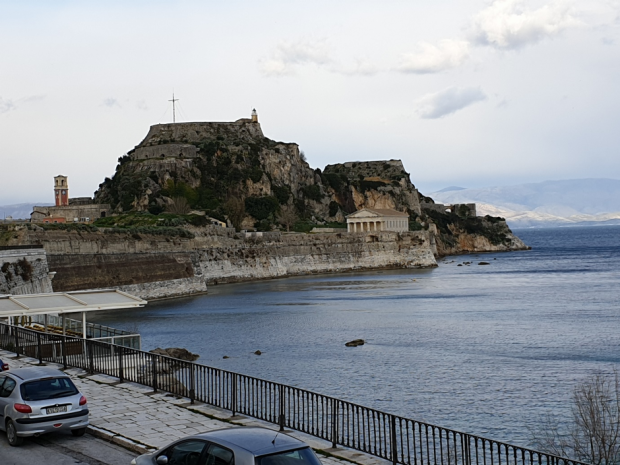 From Athens, we took an early morning flight to Corfu. You can see here the impressive colonnaded church of St. George, which functioned as the Anglican place of worship during the 19th century British Protectorate. When Corfu joined mainland Greece, this building was given to the Orthodox, and the Anglicans moved to the centrally located former Ionian Parliament building.

The Parliament was bombed in the Second World War, and the damaged building was handed back to the Greek State. But Anglicans retained use of the rear of the building, which includes the present worship space, a flat and social space (above). The chaplain (Jules Wilson) and Council have ambitious plans to turn this space into a café, for which they have been given diocesan Mission Opportunity Funding.

Churchwarden Pauline Argyrou (second right), presented an excellent history of the Anglican Church of Corfu. The Chaplain, Jules, then shared his Strategy and Vision. He recalled what Holy Trinity Corfu had aimed to do 4 years ago, reviewed how far these aims had been fulfilled, and then offered a set of priorities for the next five years, with actions needed to meet them.

I was deeply impressed by the energy of the Council, the strong role that lay people have played in the life of the church over many years, and their great sense of hope and confidence for the future.

The chaplaincy and ICS are involved with satellite congregations and missions around the island of Corfu. In the winter the coast doesn’t look so inviting, but that changes in the summer when Corfu welcomes a thoroughly international constituency of seasonal residents and holidaymakers.

One of Holy Trinity’s ecumenical partners is the Greek Evangelical Church. They run the multi-purpose ‘Lighthouse Community Centre’ beautifully equipped with soft furnishings and indoor games as well as a smart conference room that provides a place for people to meet and relax, or hold concerts or more formal gatherings. The striking lighthouse mural was painted by the wife of a former Holy Trinity Chaplain.

At the other end of the spectrum of church traditions, Holy Trinity also enjoys excellent relationships with the Greek Orthodox Church. I was honoured to have an audience with His Eminence Metropolitan Nektarios of Corfu. The Archbishop seemed genuinely interested to learn more about the Anglican Communion. We talked about our shared concerns for the environment and the vital importance of deep and trusting relationships between churches and their leaders in an increasingly dangerous and fragmented world.

One of the great possibilities of an episcopal visit is the chance to gather church leaders together. Our assembly included: the Roman Catholic Archbishop His Excellency Joannis Spiteris (on my right), the Orthodox Vicar-General Themistocles (on my left), and (facing me) the British Vice-Consul and the Greek Evangelical Pastor Miltiades. We intended this meal as an opportunity to say thank you to those partner churches who have been so kind and helpful to Holy Trinity over the years.

Returning to Athens, our programme included a visit to Hestia Hellas (meaning ‘Greek Home’). This is the small charity that provides counselling and support to sufferers from trauma and PTSD which was the subject of my Lenten Bishop’s Appeal last year. Hestia Hellas has provided important help to Greek people who suffered traumatic losses in the terrible fires in Mati last year. It now focuses mainly on families and children who have suffered trauma through the experience of being refugees or migrants. The psychological impacts of migration are often neglected, and I am very impressed with the team of professional people and volunteers working across cultures and languages in often very difficult circumstances. 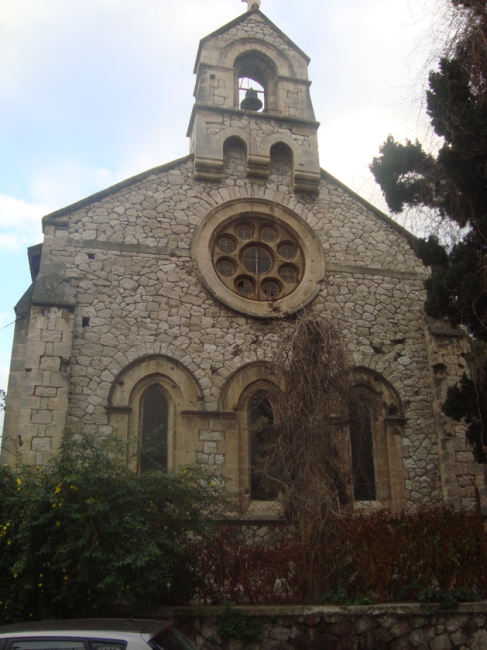 There was space in our programme for a day trip to Patras to see the Anglican Church of St. Andrew. This is a sturdy, granite stone building which is home to a now small fellowship of faithful Anglican worshippers. The building needs significant investment. I celebrated Holy Communion for the community and took the opportunity to hear their serious concerns for the future of this building and their church community. 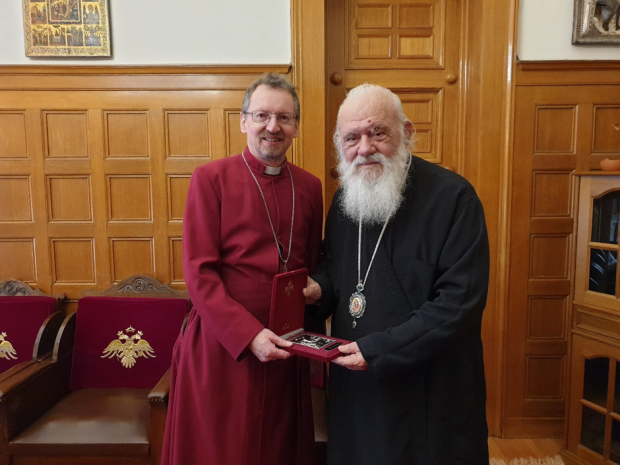 Athens is the home of Greek Orthodoxy, and it was a privilege to be given an audience with His Beatitude Ieronymos, Archbishop of Athens and All Greece. His Beatitude presented me with a silver icon depicting St. Paul at the Areaopagus. In exchange, I presented him with a modern icon of St. Sophronios, who was the Abbot of an Orthodox Monastery in Essex, ‘glorified’ by the Ecumenical Patriarch at the end of last year.

On the penultimate night of our stay in Athens, the British Ambassador organised a dinner in my honour for 25 guests including senior clergy, the Chief Rabbi, the Mother Superior of a Convent and some distinguished writers and academics. I was privileged to be seated between HE Metropolitan Gabriel of the Church of Greece and HE Metropolitan George of the Patriarchate of Alexandria. It was a truly remarkable evening characterised by a rare degree of warmth and friendship.

Our visit concluded with a Confirmation Service at St. Paul’s Athens for Amelie Tyler from New York, Magdaline Imarhiagbe (Greek and of Nigerian heritage) and Chatur, born in Athens and of Sri Lankan descent.

After the service I met with the Council of St. Paul’s and was hugely encouraged by their report on the positive developments in the church over the last couple of years and their sense of confidence in the future. One element of note is the use of Mission Opportunity Funding to enable the church to be open to visitors during the week, to everyone’s delight.

This was a rich and fulfilling visit. I am extraordinarily grateful to Her Excellency Kate Smith for her warm welcome and hospitality to Helen and me. I was humbled by the welcome I received from a great range of Greek church leaders. And I was thrilled to see what a great job our amazing chaplains, Leonard and Jules, are doing in leading their communities in Corfu and Greece. Thanks be to God.