Each year the Pontifical Council for Christian Unity and the World Council of Churches chooses a national council of churches who will produce the materials for the Week of Prayer for Christian Unity. This year it was the turn of the island of Malta. Local Christians had been working for two years to produce the materials that would be used all over the world. I was delighted to be invited to Malta to take part in their events.

Christians Together in Malta and Gozo had chosen as the Week’s theme the reading from Acts 27 & 28 which recounts Paul’s shipwreck off Malta, and the subsequent hospitality he received from the islanders.

The main act of worship took place in our Pro-Cathedral of St. Paul, Valletta, and I was honoured to be invited to preside at it. I’m used to these sorts of mid-week events being attended by the faithful few with a serious interest in ecumenism. But our service was packed, with about 400 people of all ages and backgrounds attending. The collection at the service was given away to people affected by the earthquakes in Albania. 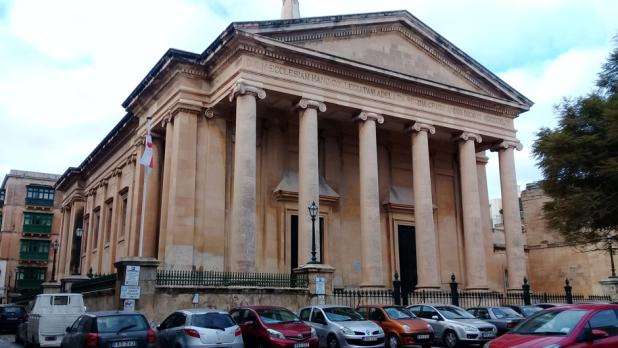 St Paul’s is celebrating its 175th anniversary this year, and the Cathedral is engaged in a large-scale building renovation and restoration. The project was initially budgeted at €5m, but has since doubled in cost to €10m. €1m has been raised by the excellent fundraising teams in London and Malta. Several more million is finding its way to St. Paul’s from a European Union heritage grant. As a result of donations received and promised so far, Chancellor Simon Godfrey has recently been able to sign a contract for £3m worth of work for the restoration of the tower and spire. Very soon, the famous Valetta skyline will be exhibiting a spire clad in scaffolding!

During my visit I was pleased to be able to meet with Archbishop Charles Scicluna (who was the preacher at our Unity Service) along with Mgr. Prof Hector Scerri – President of the Maltese RC Ecumenical Commission – pictured above. The Archbishop is exceptionally warm and welcoming, and he kindly put on a reception for the Christian leaders and pastors on the island. 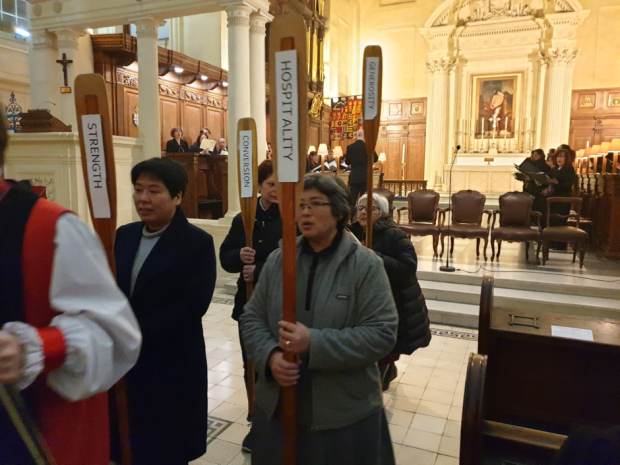 The Unity service featured a set of oars, reminiscent of the Apostle’s boat, representing different elements of the story of St. Paul’s Shipwreck.

I found it intensely moving to be sharing in this worship, hearing Acts 27 and 28 read on the island where (almost certainly) the shipwreck actually took place.

St. Luke records that the islanders treated Paul with ‘unusual kindness’, in the way they looked after him after his terrifying experiences at sea – specifically by kindling a fire to keep him warm. The Archbishop drew to our attention that the Greek word used for ‘kindness’ here is philanthropia – a word used only three times in the New Testament. It refers to the gracious, noble or simply friendly acts of civilised people towards one another.

The point is that the Maltese were not Christians, and yet still showed Paul ‘unusual kindness’. Paul stayed on Malta for some time, sharing the gospel of Jesus and conducting a ministry of healing. As a result many became Christians. So when Paul finally left, they showed a Spirit-inspired level of kindness, bestowing on Paul many honours and filling his boat with provisions.

Kindness is a virtue in which all humanity can share. And we need it as much as we ever did. For those who call themselves Christians, who are animated by the Holy Spirit, it is a virtue we can especially hope to see being developed.

‘They showed us unusual kindness’ (Acts 28:2). I am grateful to our Maltese brothers and sisters for drawing this little phrase to our attention this year. It is a phrase I will remember and endeavour to put into practice myself.