I was already scheduled to visit Nice on Saturday 16th July for a clergy gathering. But the terrible events of Bastille Day gave me an altogether more serious reason for being there.

Nice is a bustling cosmopolitan city. And it is holiday time. Travelling from Nice airport, I asked the taxi driver what the atmosphere was like. It is heavy, he said, and there is less traffic.

Holy Trinity Nice has a particular connection with the Promenade des Anglais. The boulevard was built as a result of the visionary role and missionary engagement of the chaplain and people of Holy Trinity with the poor of the city. The murderous act attacks that very spirit of generosity and compassion.

Next to Holy Trinity Nice is a flower shop. There were large queues outside. People were buying flowers to lay on the roadside. I walked on to the Promenade itself to pay my own respects at an impromptu memorial built around a palm tree and surrounded by flowers and teddy bears. One of the signs said: ‘after this things can never be the same as before’.

Fr. Peter Jackson led our prayer service, and we lit our candles. We sang ‘abide with me’. The author, H.F. Lyte, is buried in Holy Trinity’s adjacent graveyard. I don’t imagine Henry Lyte would have imagined his fine hymn being used in such poignant circumstances.

After the service I chatted to some of the congregation. One lady described how she had escaped onto the beach. Another had fled to the old town. A third, had seen the lorry coming towards her at speed and had only just managed to jump to safety.

The atmosphere in the city was, as the taxi driver said, sombre and heavy. But Holy Trinity also felt calm, peaceful and safe. Holy Trinity is a beautiful church. And the building is somewhere people can find comfort and peace, and share their experiences. One of the psalms set for the day was psalm 20, which begins: ‘May the Lord answer you when you are in distress; may the name of the God of Jacob protect you.’ That struck me as particularly appropriate. 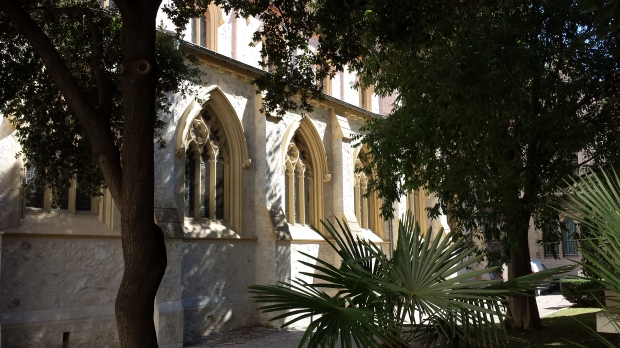 The following morning, and having returned to Brussels, I was asked to give interviews for a series of BBC local radio stations. The presenters asked me why these things happen and what we as a church are doing. There are, of course, no easy answers to why God allows events like this to happen. The inhumanity of the tragedy was simply awful. It is devastating in its impact on the lives of hundreds of individuals and families. It is utterly evil.

In the face of such tragedy, the church can provide space for people to reflect and to grieve. It can try to provide comfort and solace.

Beyond that, we are a part of civil society. And we can work with other churches and faiths to help our communities hold together. There are amongst us people with deep grievances and there are too many weapons in circulation. And a heavy lorry can become a deadly weapon in the hands of someone intent on violence. It is vital that we demonstrate tangibly and symbolically that acts of violence are an outrage to all people of faith. We can play our part in fostering community cohesion and inter-faith solidarity. The aim of terror is to break our communities apart. Part of our role is to help make sure it does not succeed.